Content from Sam Chara at VSMA
Everything old is new again at Tea Parlour, a quaint haven for city girls looking to escape the hustle and bustle of Sydney. The brainchild of Amelia Hepburn, it was opened with revival in mind – a return to old world charm, Biggie tunes and, if you are so inclined, polite conversation over some tea and scones.

Amelia wanted to create the “club feel” of the Country Women’s Association and transport it to the city. “I really like the idea of doing bridge nights and tea leaf reading nights, clothes swaps and book clubs. Sometimes you feel a bit lonely in the big city. Everyone is so fast paced, it’s a bit isolating.” She also found there was little to do in Sydney other than go out and party. “This is a rebellion against our disposable society. Being young in the city, we only seem to have a few pastimes available to us – shopping, binge drinking and night clubbing. I wanted to offer another option that was fun and affordable.” 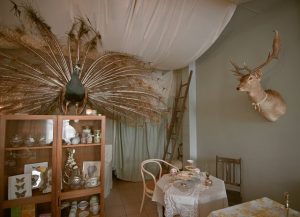 Tea Parlour’s menu offers all the elements that one would expect from high tea, including an array of home baked pastries, cucumber sandwiches and fluffy scones, but the best thing about the menu is, of course, the selection of tea, hand picked by Amelia. It ranges from classics devonshire and peppermint to the slightly more exotic, like quince green, Mongolian herbal and Wuyi Rock oolong.

The last thing that comes to mind when you step into Tea Parlour is ‘cheap’ with its delicate china, mismatched Victorian armchairs and sprawling stuffed peacock centrepiece, but this is what Amelia says inspires the things she does. “Unfortunately, that’s the financial position I’m in at the moment!” says Amelia. It’s not until it’s revealed that much of the parlour’s decoration is from op-shops and eBay that you appreciate Amelia’s knack for a thrifty find.

She believes the large supply of cheap antique China collecting dust in op-shops and attics are severely undervalued. “I love all of that stuff and it’s just going to waste. I don’t really understand why any of the hotels or cafes don’t use this cute China that you can pick up for $2 at Vinnies.” 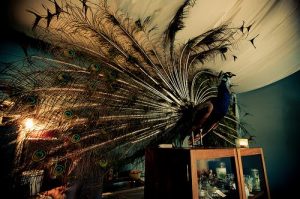 Having only been opened for just under two months, word is only just beginning to spread about Tea Parlour but Amelia has already found some like-minded people. “It’s just like hanging out with fun girls all day and listening to music,” she says. But she admits that starting her own business was scary. “It still is very scary. Even for just a tiny room that just sells tea, it’s a lot of money. You have to pay three months lease up front and the bond and all that sort of thing. I said to my housemate, ‘Oh this is really scary, I think it’s too much for me to take on,’ and he said, ‘Is it scarier than working in an office?’ so I guess even if it’s intimidating and it’s a lot of work, what else is there?”
It seems her answer was found in a cup of tea.
Tea Parlour
569 Elizabeth St Redfern
Thurs – Sun, 12pm – 8pm
Ph: 0414 335 224

Tea Parlour will be holding its first Clothes Swap Party tonight (Wednesday, November 3) at 7pm. Entry is $10 with iced tea, cakes and scones included. You may bring as many clothes as you want to swap, the only requirement is that you bring them in a condition you would like other people’s clothes to be. For more information please click here (http://www.facebook.com/event.php?eid=153961747975560) or contact Amelia on concierge@teaparlour.net. 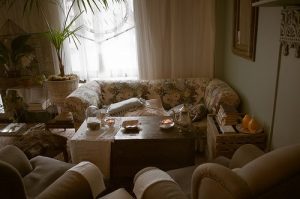 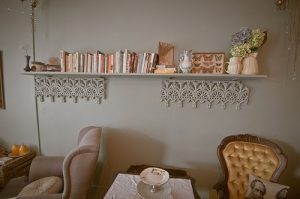