I wrote this a few months ago when I was working at a fashion agency and did something rather stupid. I’m recycling it from my personal blog because I want EVERYONE to know what a dickhead I am.

One of my clients came to town today, and she just happens to be one of the greatest designers in the world, so naturally, when I got dressed this morning, it was my mission to look my absolute best. I mean, I HAD TO IMPRESS THIS WOMAN. So it was unnegotiable to wear anything other than the best dress I owned, and people, I’m telling you, I own a lot of dresses. It was of course one of said designer’s pieces, complete with frills, ruffles and the like, and it had the ability to make even a horse carcass look pretty, if put on the right way of course. I completed the look with my Marc Jacobs studded boots, packed my bags, and set out into the world.

As was to be expected, everybody was looking at me, and why wouldn’t they? I had a pretty dress on! On the way to the ferry, people turned their heads. On the ferry, where I sat with the same 200 people who I catch the 8.15am service with every day, everyone was looking, and the man who I was sitting next to couldn’t help but glance in my direction throughout the journey. But who could blame him? I was the Princess of the Suburb! Then, as I walked up the escalator to the train, these two service men were just staring at me. MY DRESS WAS SO PRETTY. The ladies who sat near me on the train couldn’t help but stare at my dress, and when I got off the train, the lady who manages the newsagency at the platform I get off at every day just looked at me… differently. It was like I was an ethereal beacon of light, put on earth this very day to show people a pretty dress. The same guys I pass on my way to work each morning were drinking their coffee and smoking their cigarettes as usual, but this time, they looked up as I walked by. When I got to the office, I felt like today… today was going to be a GREAT day.
Pretty dresses have so much power.

As I put my bags down and sat at my desk, my colleague Jon walked in, and, as a man of style, I just knew he was going to be impressed. So when he pointed at my dress and smirked, I paused, smiled, and waited to be delivered the – well, the rather inevitable – compliment. But instead, he started laughing. Okay, okay, I looked so good it was making happiness in the form of laughter arise, this was awesome. I knew the compliment was coming. It had to.
But then, when I noticed that the look in his eyes resembled amusement more than anything else, I turned my head to where he was pointing, and there it was: MY PRETTY FUCKING DRESS WHOSE SIDE ZIPPER HAD NEVER BEEN DONE UP.

On the way to the ferry, on the ferry with those 200 people I see ALL THE TIME, at the train station, on the train, at the platform with that woman I see EVERY DAY, on the way to work with those men I pass by EACH MORNING, I didn’t even blink with recognition that maybe, just maybe, these people weren’t looking at my dress, but at the dumbass who forgot to zip up, and at the gaping hole which exposed a full-on side view of everything from my bra to my panty line. THIS BITCH AIN’T ONE TO LEAVE THINGS UP TO THE IMAGINATION.

Epilogue
I no longer have to travel the aforementioned morning route. 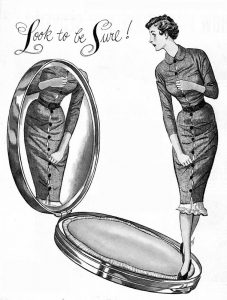