To find the beauty in chaos, one need not look any further than within the artwork of Nanami Cowdroy. Juxtaposing her Japanese heritage with her Sydney surroundings, Nanami mish-mashes such contradicting elements as urban landscapes with underwater creatures and technology with nature in a way that brings a sense of co-existent harmony – the kind that can only exist in the fantastical world of art. With a seemingly swift brush of black and white, Nanami eclipses the world of colour for one that was instead made for shades of grey. Rather than defeating the complexity of settings in the process, she is able to apply the mediums she uses – which range from ink to pen and everything in between – to create things exactly as they would appear if they were two-dimensional drawings. From origami to human features, Nanami injects texture into her work and adds detail in miniscule proportions, achieving an unlikely level of depth that is as admirable as it is hypnotic. Her smooth-as-liquid style is inimitable, with playful splotches of ink spread throughout that serve to defy the boundaries of mistakes and mark her signature in yet another way. 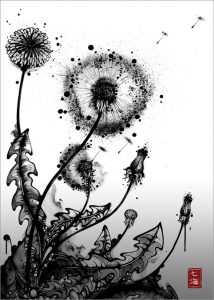 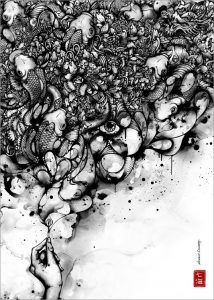 Born and raised in Sydney with frequent trips to Tokyo to see her mother’s side of the family, Nanami recalls the influence of both cities and their accompanying heritage as defining elements in her creative style. “I was brought up with strong ties to life both here and there, and our home reflected that. It was a total blend of both European and Japanese styles… it was filled with lots of objects and images (photos, books, art and crafty things) from both countries.
“My mother was a Japanese Ikebana (flower arrangement) teacher in Sydney, and seeing her create her floral sculptures was always interesting. There’s a great philosophy and discipline behind it, which I learnt from her that is quintessentially Japanese.
“And with dad’s ‘Aussie-Euro’ family of painters, writers, (political) cartoonists, and designers, it was hard not to be influenced. Wherever I looked, my parents had oil paintings of Australian bush landscapes hanging beside old Japanese Ukiyo-E wood block prints, sketches of Sydney suburbia next to Sumi-E scrolls of bamboo, Australian-made clay vases from the Blue Mountains placed in front of a Japanese decorated screen of cherry blossoms, and photos of Sydney Harbour framed together with photos of Mount Fuji and local Tokyo temples.”

Referring to Tokyo as “a big concrete mass,” she says she finds the lack of space and the size of its population ultimately incredibly inspiring. “What could be viewed as ‘ugly’ like tangled up power lines, cramped alleys and gritty streets, I feel has it’s own ‘raw’ appeal … as it’s not trying to cover up anything.” In contrast, Sydney is her complementary muse and a fitting balance to the mega metropolis of Tokyo. “We’re lucky to have such great open spaces, and leafy areas in and around the city. It’s not that hard to find a place to sit down and take a break, or catch a breathe away from the concrete shadows.” 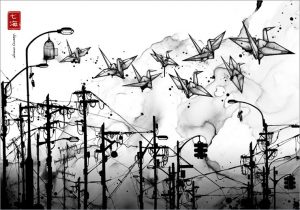 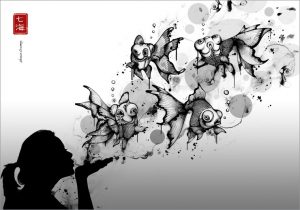 Being brought up in a family of artists encouraged Nanami’s creativity and allowed her to embrace her view of the world through artistic goggles – something she put on at an early age. “When I was maybe three or four, I got my hands on some face paints, and I became obsessed with them! I drew whiskers, butterflies, stars, spiders, glasses, vampire blood, stitches, you name it – but I was allergic to them! Though that didn’t stop me… I ended up drawing on my face every second day, with the alternating day used to calm down the skin irritation & swelling… I guess you suffer for your passion!” Nonetheless, she was well aware of the difficulty in pursuing it early on. With that in mind, she chose to pursue graphic design, but the journey eventually “came full circle” when she re-embraced her roots to pursue art.

“To be honest, it was never really a conscious choice or decision for me to be an artist. It’s always been something I have done, and is a part of who I am at heart.”

There are definite recurring elements in Nanami’s work – particularly fish, which show up in tears, bubbles, a deck of cards… you name it. Such an obvious fascination makes it impossible to interview Nanami and not ask her about them, to which she replies that she is “ very fond of fish and they have always been good to me!
“There are so many things about them that interest me. Growing up I always kept goldfish as pets (as they were the only kind of animals allowed in an apartment building) and no matter how well I looked after them, it always fascinated as well as concerned me about how uniquely delicate and relatively short-lived they were. They were fun to watch, but equally frustrating to find out they went belly up in the night… I used to dread it!
“To me, they have a real unique beauty as well as mystery about them… how something so expressive and vibrant, can equally be so fragile and fleeting.”

“In my mind, fish are creatures which embody such a combination of contrasts – elegant yet quirky, delicate yet spirited also – characteristics and subjects which I love to explore in my art.” 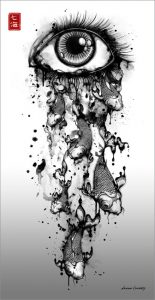 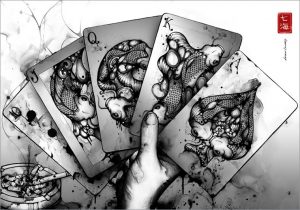 Another predominant theme is that of the urban lifestyle and the pandemonium it radiates.
Certainly not the first artist to be inspired by the marvel in disorder, Nanami describes her curiosity of chaos as the main reason why she embraces detail and getting lost in it when she creates. “It gives me a great sense of freedom (and not to mention a kind of personal therapy) to try and get it down on paper, and go wherever my imagination takes me – in whatever shape and form. Plus I enjoy the wonder and sensation of seeing something sitting amongst the jumble when you look closely enough; things which may not always be visible in plain sight.”

Although such subjects are obvious due to their consistency, Nanami insists that they aren’t necessarily intentional – she simply creates as she feels and draws on things from memory, with her childhood being a formative factor. For example, she reflects on the origami cranes her grandmother taught her to make when she was little. “Being the obsessive perfectionist even back then, I remember getting half way through making one and if by that stage they weren’t resembling the perfect points and folds of hers, well, put it this way… I felt pretty crushed.
“Paper cranes have a special place in my heart, as they’re something I associate very closely with the memory of my dad, as well as my grandmother. In Japanese culture the Crane ‘Tsuru’ is a very sacred animal, and is a famous symbol for longevity, loyalty and peace. So when I draw them, it’s usually my own way of wanting to keep their precious memories alive and well.
“There’s an old tale of whoever folds a thousand cranes, will have their heart’s wish come true… I guess my hearts wish is to draw a thousand of them!” 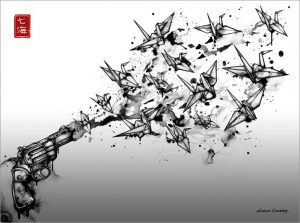 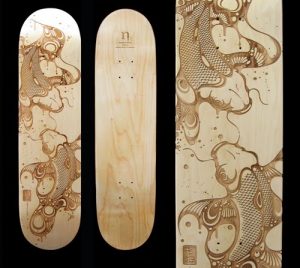 Choosing to work in black and white because “they make a good couple,” Nanami says she feels she can express herself more freely on a dark palette and that it has an honesty, permanency and complexity to it. Combined with shades of grey layered onto a white piece of paper, the result ends up conveying a sense of rawness and drama which Nanami relishes in. But to start any piece, Nanami says she has to get into a certain headspace – starting with a distinct picture and plan of the overall look and composition. “From there it becomes more of an organic and intuitive process, where the hand and mood takes over ‘filling in the details’ at will, and then it generally takes on a life of its own.
“I tend not to do preliminary sketches very much… I pretty much jump in the deep end. This has proven to be quite risky – not sure why I still do it actually? But I think it’s a hardheaded Capricorn thing; all or nothing.
“My preliminaries tend to be a very basic doodles on a scrap piece of paper, as I don’t really like channeling all my energies into something that’s not going to be the real thing, as I feel I may get it right in the doodle but wrong in the actual piece…
“I guess with some of my more involved and heavily detailed pieces, they do somewhat become a visual documentation of how I was thinking and feeling over time. Some areas are more reworked than others.
“I used to be more rigid when creating my works, in that I would try to faithfully reproduce what it was I was seeing in my mind. But as my works generally take weeks or months, this would become quite frustrating, as the mental details weren’t as vivid as originally conceived. If there were a dream scanner, I would have definitely looked into investing in one!”

Although the process seems as though it is clearly defined, Nanami does describe her style as having evolved over time, particularly when she made the switch back to drawing from graphic design. She says she will remain faithful to illustration from here on in, but may look to develop it further on different mediums and different surfaces. She urges aspiring artists to also stay true to their natural talents and artistic instincts, “as they are things that cannot be taught nor replicated.”

Nanami has been recently collaborating with Click For Art, who have released some of her artwork onto objects such as mugs and pillows. She has also been working with Nissan Micra for a campaign called Tweet City, where she has drawn famous buildings and monuments from specific cities throughout the world.

Nanami currently has work on display at Urban Uprising on Crown Street in Surry Hills. For details on any upcoming exhibitions, you can check out her website. 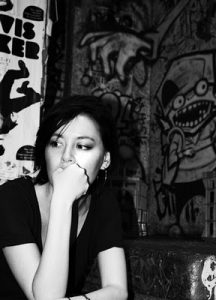