Freedom. It can be a beautiful thing, but it can also poison the writing process. When I was given the freedom to write about my favourite films of all time, I jumped at the chance. After all, what aspiring film critic doesn’t crave the opportunity and space to harp on about the films that have truly effected their lives? My list of favourites is many and multiple, spanning decades and genres. In truth, my list (yes, I’m actually that anal I have them written down) includes more that 50 films, each which I love and champion for one reason or another. However, I can’t say I can single just one out, so I won’t bother. Instead I intend to write about them all (eventually) in this treasured corner of Side Street Sydney.

To kick-off the segment I figured I’d write about one of the most amazing films I have ever seen, and one I fear not enough people know about. It’s called Brick, and was the debut film by 32-year-old American filmmaker Rian Johnson. I know, not the most appealing movie title, but thankfully I don’t see movies based on title alone. Although, I did hire Mega Shark vs. Giant Octopus purely on the fact it had the most ridiculously kitsch name ever . . .and I was not disappointed. I first saw Brick in my first year out of high school back in 2006, and I remember stumbling out of the cinema in a daze. My puny, 17-year-old mind had been blown, put back together, and then blown again. Shot on a scant budget of $450,000 in Johnson’s hometown in San Clemente, California, Brick follows the plight of Brendan Frye (played by Joseph Gordon-Levitt) as he tries to uncover the truth behind the disappearance of an ex-girlfriend. The film is a hardboiled detective story, paying homage to classic film noir movies of the 40s and 50s. Yet Johnson has given the scenario a modern twist by setting the film in a high school with teenage protagonists.

It could have gone horribly, horribly wrong, and turned in to something like Mean Girls with a body count. But Johnson and his young cast succeed in so many respects it’s boggling. How do I even start praising this film? Firstly, the plot; it sounds simple, but like all great film noir’s it’s only minutes before the central character is thrown in to a dizzying spiral of lies, murder, drugs, and moral complexities. Like The Maltese Falcon and The Big Sleep, a great noir is nothing without fascinating characters, and Brick has them in truckloads. From femme fatales and misunderstood geniuses to drug kingpin’s and psychotic muscle-men, the patchwork of personalities helps create this immaculate story. The performances are pitch-perfect, particularly Gordon-Levitt in the lead as Brendan – but in all fairness it’s impossible to find a film he’s not good in. Seriously, it doesn’t exist. Standing alongside is one of the most promising young actors of my generation, Aussie actress Emile De Ravin, who does a stellar job as the damaged and flighty ex-girlfriend Emily. Other standouts include Nora Zehetner as the deadly Laura, and Lukas Haas as the Pin.

It’s simply magic to watch the characters perform the beautiful dialogue, much of which Johnson took from classic detective novels by Dashiell Hammett. And visually, it’s like watching poetry. The way Johnson has emphasised the wide-open flat spaces and his close-ups of the key characters are mesmerising. Considering the tiny budget this was shot on, the action scenes and special-effects are flawless. It’s no wonder this puppy took out the Special Jury Prize at the Sundance International Film Festival for originality of vision, as you will be hard-pressed to find a more unique and complex thriller. Notably, in 2007, Brick was nominated for Scene of the Year (for the foot chase), and Johnson for Best Male Newcomer at the UK Empire Awards. It also managed to snag a place in Empire’s 2008 list of the 500 greatest movies of all time – no mean feat. At the end of the day, the awards basically mean jack-shit because you can’t determine the merit and value of film based on whether there’s a statuette sitting on your coffee table. Sure, it helps build interest in the movie and encourages audiences to see it, but all you need to know about Brick is it’s one of the most brilliant and thrilling detective stories to have graced the silver screen. See it or perish. 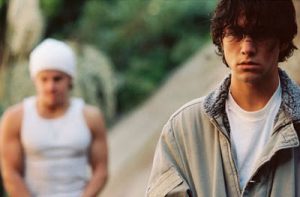