Situated somewhere between performance and political activism lies Version 1.0, a Sydney theatre company that casually skips over the line dividing art and current events. Whereas most visual stimulation taps into our psyche and greater sociology, Version 1.0 creates shows that present a side of the story which you won’t hear from the newsreaders.

Its latest piece is called This Kind of Ruckus, a drama that explores the themes of gender, power, control and violence, and the aftertaste of remorse in the fight-make-up-break-up cycle lurking within dysfunctional relationships. Counselling, structured gender roles and stuffed animals and flowers offered as inadequate apologies are blended with commentary on the recent high profile sexual assault scandals involving the nation’s rugby league players to create a performance which is always relevant, but even more so today.

“We’re what you might call news junkies,” says David Willams, CEO of Version 1.0 and a performer in This Kind of Ruckus.
“We started working on This Kind of Ruckus last July, and as we were in the beginning of the creative process a series of scandals came out from the National Rugby League, so there were all these issues in the public sphere that once again brought out the attitude towards violence, power and control in relationships.

We’re not only commenting on the extraordinary, horrific cases, but also reflecting on the way we behave, supposedly as good people in the world – and recently, the world has told us that this show is important.” 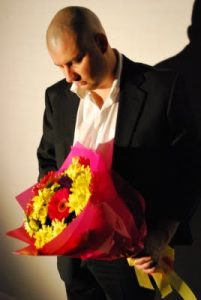 David Williams in character as the pathetically apologetic perpetrator.

Noting journalism as a critical part of their performance, David says Version 1.0 aims to present a view that news often cannot.
“Theatre provides an experience for a group of people – they have to sit and make sense of the performance as they go along, and they are forced to confront questions such as whether it is okay to watch this and whether that kind of behaviour is normal,” he says.
But it’s not all serious – while it is meant to be informative, entertainment is the top priority, as is ensuring that the audience is provided with a strong experience. Collaborative from start to finish – with no one even taking the title of director – Version 1.0 has been making performances for 11 years, and the past 6 of them have been with a political focus. They did their first piece on global capitalism, and then they started working more seriously with public documents once the demand for that kind of performance heightened. Unscripted, the performers largely improvise and experiment as the performance starts to take shape. The performers’ diverse backgrounds – from academics to sound artists – all leads to intense moments in the development process.

This Kind of Ruckus is showing from September 3 to September 12 at Performance Space, Carriageworks, Eveleigh, with an artist talk scheduled for September 10. Tickets are $15-25 and can be booked at www.ticketmaster.com.au or by calling 1300 723 038.